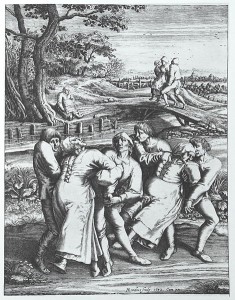 What is MPI? It’s a mysterious– and still unknown-– psychological illness that mysteriously manifests in a group of people! And it spreads quickly!

The most recent case was in 2012 and involved a group of teens at a high school in upstate New York. Symptoms included twitching movements and verbal outbursts similar to that of Tourette’s syndrome.

Incidents of  mass hysteria have been chronicled for hundreds of years.

It’s the subject of THE MERKABAH DECEPTION, the 2nd in the Merkabah Series, the  continued adventures of the empathic professor who solves paranormal crimes for a mystical organization.

The most famous example of Mass Hysteria might be the Dancing Plague of 1518. One lady began some impromptu dancing in the streets of Strasbourg,France. Still dancing, and about a week later, 30 folks had joined her. By months end, 400 people were dancing feverishly, often dancing until they died from dehydration, stroke, heart attack, and/or exhaustion.

Eyewitness accounts of the time claim the people were not dancing because they wanted to but because something possessed them. Creepy!

For an 8-chapter sneak peak of THE MERKABAH RECRUIT, the 1st in the series click HERE.

For a sneak peak of THE MERKABAH DECEPTION,  the 2nd in the series, click HERE.

An insidious evil is threatening to escape into our world and only an empathic professor can stop it.

Distraught by the frequent psychotic episodes and convulsions spreading through the student body, the owner of a prestigious prep school seeks help from an occult society. Daphne Sites, the newest member, must determine if the mass hysteria has unearthly origins. She’s a bit anxious—this is only her second assignment.

Daphne soon discovers she’s in way over her head after a terrifying encounter with one of the possessed students. And attacks by thugs and nonhuman enemies don’t bolster her courage or confidence either!

The search for answers sends Daphne to the Amazon jungle, Ecuador’s majestic cathedrals, a creepy hacienda, and a ghoul-infested catacomb. Discerning the truth from the lies is critical if Daphne hopes to survive.

Legends, lies, and lust thwart an empathic woman’s attempts to stop a supernatural evil in the 2nd book of the Merkabah Series.