Humans are a psychotic bunch! Many of us are stressed and frantic.  Oh, lucky and blessed are the rare individuals who possess a Zen-like demeanor and state of being.

Have humans always been stressed-out?

You know it! Even THOUSANDS of years ago! 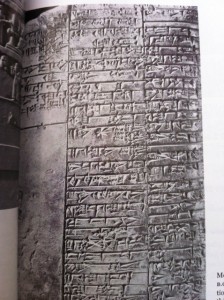 Yup! There’s clay tablet proof! And you know, if it was written in stone is has to be true.

Seems back in 1300 BC, those wacky Hittites—residents of what is now modern day Turkey—even had the ancient equivalent of a profession we call on during times of emotional trouble— psychologists.

The Hittite translation was not nearly so scientific: Old Woman.

Masdigga was an early psychologist in Kizzuwatna (turn right at the ziggurat and go 200 miles until you get to the coast–you can’t miss it).

Straight from 70 clay tablets, here’s a couple of the problems Masdigga dealt with and her remedies.

Anger Issues/Marriage bickering ( strange how those two are linked :  Burn a tongue-shaped package of mutton fat and wool over a fire while counseling the individual/couple on methods for releasing their anger. ( I should have tried this with my Ex)

Enemy worries: A 3-day seminar, complete with a keynote speeches by angels  who advised on using mind control techniques  ( mind games) to conquer their enemies.

The BIG drawback to being an Old Woman in those days—besides, perhaps the title—was that Hittites believed natural disasters and plagues were the result of the Gods’ wrath! This required her to appeal directly to the Gods. And oh boy, are they picky!

Masdigga also did some moonlighting as a Notary! That’s right, her profession included authorizing the legitimacy of documents. Yup, even back then we needed these folks.

What was the average salary of an Old Woman/psychologist?  Sadly, not much. Coin was scarce and so she was paid in goods and services.

Any you thought you were busy!