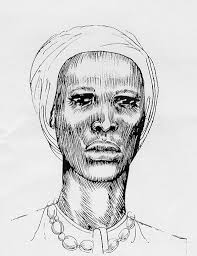 Sold into slavery by a rival tribe as a child, Nanny was brought to Jamaica to work the sugar plantations. Word of her love potions and spiritual arts eventually garnered her the respect of white and black alike.

Not content with the slave life, Nanny hightailed it into the dense Blue Mountain jungles where many run-aways lived with the natives. A natural leader, Nanny soon became the leader of the Windward Maroons–a large group of ex-slaves determined not to submit to English rule.  A powerful organizer, Nanny eventually commanded several  Maroon groups in the Caribbean.

The English, underestimating the determination, smarts, and cunning of a slave sorceress,  endured heavy casualties caused by the guerrilla warfare tactics of the Windward Maroons  Eventually, a peace treaty was signed and the Maroons were able to live free–for a while anyway.

Grandy Nanny is a national folk hero, has two towns named after her, and has many folk claiming to be one of her descendants.

Don’t mess with a woman on a mission!