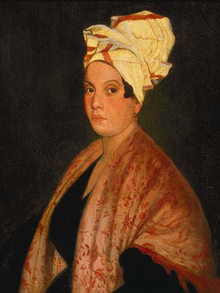 Born in Haiti in 1794, this beautiful and multi-talented woman took New Orleans by storm. Voodoo storm! Other accounts claim  she was born in the French Quarter to a white farmer and African American woman.

Marie went from hairdresser and cook to voodoo queen. Talk about diversification!

Violent uprisings in Haiti prompted the smart gal to seek a safer home. She married another Haitian refugee and had 15–that’s right–15 children. Other accounts say her husband died ( mysteriously,of course), and that those 15 kiddies were Christopher Glapion’s, a man she lived with for many years.

No stay-at-home mom, Marie got a job at the city jail where she learned to be an excellent listener. Secrets, shady dealings, and all things scandalous of the rich elite was her ticket to success and a new career.

Soon, Maria’s love potions, psychic readings, spiritual guidance, and all manner of herbal remedies became the talk of the town. Savvy business woman that she was, promised results were based on ability to pay. But she still charged a pretty penny–$10.00 if you were poor–and that was back then!

Although there were reportedly over 300 voodoo priests and priestesses practicing in New Orleans at the time, only Maria had earned the title of Boss woman.

She was known for putting on frightening and gory voodoo shows. Nasty dancing with  with a scary-long snake named Zombi and beheading roosters drew very large crowds.The money poured in.

She died a wealthy and powerful woman in 1881 at the ripe old age of 89. An impressive life for a woman living during those times. She earned power, money, and prestige through her wits and determination.

Her daughter, Marie Laveau the 2nd continued in the family biz.

Voodoo: The word comes from the West African vodun, which means “spirit.” The religion began in Haiti and is a combo of many different African beliefs, which are often mixed with Catholic-like practices and rituals.

The religion centers around the belief that spirits have power and influence over the natural world. Therefore, a connection with the spiritual world is needed to make a physical, spiritual, or emotional change.

Several types of powerful ancestral spirits can be summoned:

Marie Laveau: How would you like a Voodoo Queen for a mom?