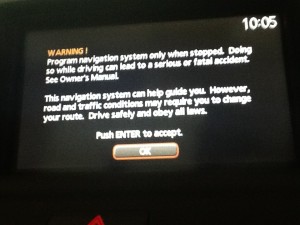 “Did you get directions?” I ask whenever we are driving somewhere we haven’t been to before.

“Don’t need them: I know where it is!” Hubby’s reply is confident and convincing.

“You don’t want me to MapQuest it?” (Yeah, yeah, I know MapQuest isn’t a verb)

He gives me “The Look.” AKA, I have lived in SoCal for a loooong time and know every conceivable street and freeway in existence. “I know where we’re going.”

Depending on my mood, I may: attempt a sweet smile (not my natural look); roll my eyes; lift my brow; or bite my tongue. “OK. But why don’t you just give me the address so I can input it into this fancy new car’s navigation system.”

“Good idea, but I don’t have the exact address—just  put in the street—we’ll see if  it knows the best way.” 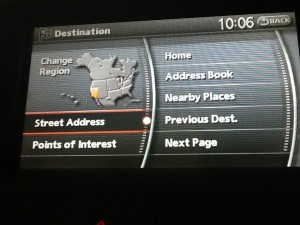 We are barely out of the neighborhood when Hubby turns the wrong way!

“It’s west on the freeway!” I point to the screen—a bird’s eye view.

Sure you are. I glance back at Smug Teen who is plugged into tunes and bobbing head to some hip-hop beat.

Of course, the navigation system doesn’t LIKE when you do not obey their instructions. “Turn around. Turn around.” The smooth female voice demands as Hubby willfully disobeys every command from the Navigation Goddess!

He laughs! “She doesn’t know the short cuts.”

She? Might this be…could this be… a modern macho man’s way of exerting control over women? Mmmm….Would he obey if the voice was male?

An hour and half later, we arrive at our “destination.” Not the right one, mind you, but a destination somewhere in the general vicinity of the vague address.

“We’re lost!” I point an accusing finger at him.

“No, She got us lost.” He gestures to the Navigation Goddess. “I know where we are! We’re really close. Why don’t you ever believe me?”

And you know what? He’s right. 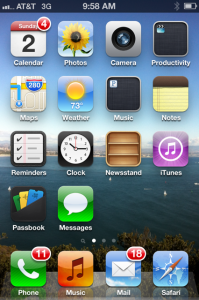 Smug Teen lifts up SmartPhone and points to screen. “It’s a block away.”

Riddle:  How many navigation systems does it take to “get there?”

Answer: One teenager with  a SmartPhone!