Hubby “Helps” in the Kitchen

Yesterday! The Kitchen! Hubby “helps” me.

While I send a query letter, post on Facebook, twitter—you know, the social media stuff—Hubby loads the dishwasher and turns it on.

Wonderful, yes?  The kitchen is cleaned—not too tricky since we had a Costco meal—the counters are germ-free—and least that’s the claim on the spray bottle.

Tappity-tap-tap-tap. My fingers on the keyboard.

Lovely white suds are billowing out from under the dishwasher. 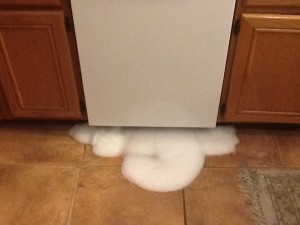 The moment those words leave his mouth—I KNOW! “What did you put inside the dishwasher?” I’m afraid to look. (Actually, I lie. I’m afraid  I’ll have to clean it up.) How does one clean soap bubbles, anyway? 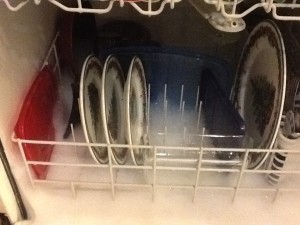 Hubby opens the dishwasher and it’s FILLED with iridescent bubbles—they might even be described as pretty if it weren’t for the mess involved.

As I write this, the dishwasher is going through yet another rinse cycle. And soap suds are still on the floor.

The dishwasher liquid vs dishwashing liquid incident reminds me of when: 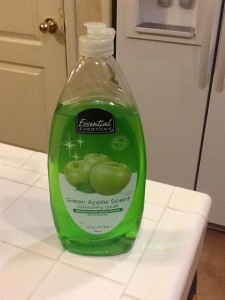 Not for automatic dishwashers.

What silly things have you done? Lately.