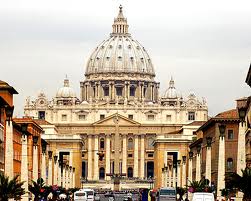 There exists more lore, legends, and conspiracy theories about the Vatican than the US Government! And everyone can agree–we all love the mystery and intrigue that comes with powerful and prestigious organizations.

One common papal myth is that the Pope never makes a mistake. This might have come about because of the mistaken notions about Papal Infallibility. The term refers to his issuing Church proclamations that are:  1) based on faith and morals;   2) applicable to the entire Church; 3) supported with full Papal authority, as opposed to his private personal beliefs.

Another myth is Saint Joan, the supposed female Pope of the 13th century. Apparently  there’s no actual proof of her ( besides the chair ) in the annals of Vatican documents. But hey! I’m always up for a good conspiracy theory about that myth! 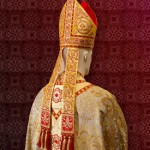 Lappets:  The two long strips of cloth that hang from the back of the Pope’s headpiece ( tiara)

Martyr: A person who dies for their religious belief. During the 1st century AD many Christians were tortured and killed by evil Roman emperors, thus being martyred.

Missal: A selection of scriptural passages and prayers used during mass.

Mortal: A sin so bad the consequence is Hell. 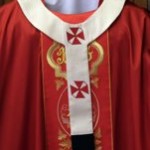 Pallium: The wide circular collar with front and back strips that the Pope wears over his vestments.

Pontiff: Another name for the Pope. Pre-Christianity the word referred to the highest priests.

Prorogation: Fancy word for putting off a decision or action. Stalling 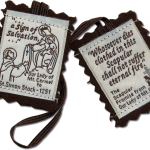 Scapular:  A cloth pendant necklace that has been blessed.

See: another word for Diocese 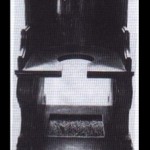 Stella stercoraria/Porphyry Chair: Looks like a toilet seat  and is used to elevate the Pope. The myth is that the chair was used to prove the gender of the Pope, thereby preventing any more Pope Joan snafus-which, evidently, no real proof of such a woman Pope exists.

Strator: Christian leaders who act as helpers to the Pope. Originated when Constantine (first Christian Roman emperor) acted as a groom by leading the Pope’s horse by the bridle.

Synod: another word for council

Synoptic Gospels: Gospels of Mark, Matthew, and Luke are all  (pretty much) collaborative accountings

Venial: A sin that’s not so bad as to damn you to Hell.

Veneration: To revere or regard with great respect. A saint can be venerated but not worshipped.

The Catholic Church is in the thick of choosing another Pope. I wonder if the new Holy See will also have a twitter account?