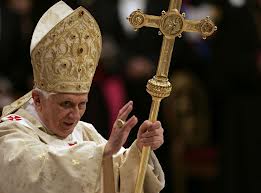 Lots of media chatter about the Pope and his successor these last few days! Who will be the new leader of the Catholic Church? If we watched the movie or read Dan Brown’s novel Angels and Demons we might be familiar with some of the terminology. Like any organization, the Church has its own language.

Even though I attended CCD ( Catholic catechism class) during high school  I don’t remember the nuns ever providing us with a papal lexicon.  Such a list might have come in handy during these times.

The following is the first of 2  posts defining a bit of the Vatican Vocabulary.

Vatican Vocabulary     A thru J

Adoration: Process by which the candidate with enough votes is declared by the Cardinals( Conclave) to be the next Pope.

Anathema: Condemned for heresy and excommunication by the Pope

Antipope: Men in ancient times who claimed to be Pope, but were not.

Archpriest: A senior priest in the diocese

Benefice: Holding an office that produces an income

Brief: Short communique from Pope which is sealed with the Fisherman’s Ring

Bishop: Kind of like district managers, they manage a region or geographical area.

Bull: Official communique from the Pope to some or Church members. The lead seal makes it official.

Camerlingo: The cardinal who is NOT in conclave, but instead manages Church goings-on

Canonize: A Pope proclaims someone a saint. There’s a whole bunch of rules and proofs for this to occur. Miracles etc…

Cardinal: The Pope’s cabinet, in layman’s terms. They can also be bishops and priests

Collagium: Money paid to the bishop if a priest wanted a concubine (in the Middle Ages)

Conclave: Cardinals locked in a room to elect new Pope. This was done so they didn’t dawdle.

Deacon: Person who can preach at mass or help with communicant, but cannot administer the sacraments. Ordained bishop’s assistant.

Diocese: Territory of the bishop.

Excommunication: No longer being allowed to receive the sacraments.

Interstices: You can’t just zip up the Vatican ladder, you know. This is the amount of time between appointments.

Jubiliee: The Pope declares a Holy Year every 25 years or so. It had a much different meaning in ancient times, but I’ll save that for another post.

No, there’s no vocabulary test! Whew!