WWGWD? What would George Washington do? 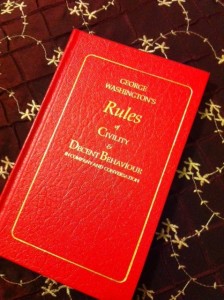 During a recent trip to Philadelphia, Pennsylvania I ran across a charming little book titled: George Washington’s Rules of Civility & Decent Behavior in Company and Conversation.(Yeah, I know, a long title) This wee book lists 110 rules for civil behavior that the Father of Our Country wrote down at the mature age of 14. The rules come from a French book on self-control, social behavior, table manners, and Christian virtues.

Oh dear, if ol’ George could see us now!

Here’s a small sampling of his maxims. I made the 200 year old English ever so much more reader-friendly.

1. Don’t sing, hum, or drum your fingers in the presence of others.

3. Cough, sneeze, sigh, or yawn privately, or at least cover your mouth with a handkerchief if done publicly.

4. Don’t bite your nails in public.

5. Don’t roll your eyes, lift one eyebrow, make a face, purse your lips, or shake your head when listening to someone.

6. Don’t kill any fleas,lice or ticks in public. If you see one on your companion, quickly and quietly dust if off.

7. Don’t look over someone’s shoulder while they are reading a book or writing a letter.

8. Don’t be happy at the misfortune of others.

9. Don’t laugh too much or too loudly in public.

11.Don’t try to win an  argument with your superior.

13. Don’t walk around thinking you’re all that. ( Washington’s word were “play not the peacock”)

14.Don’t be too quick in believing mean-spirited gossip.

15.Surround yourself with people of quality.

16. Don’t ask your friends to divulge a secret.

17. Don’t give unwanted advice, and if someone does ask for it, offer it briefly.

18. Don’t criticize the actions of others unless you are their parent, master, or superior.

19. Don’t stare at people’s marks or blemishes and ask them how they came to be there.

20. Don’t speak another language in front of someone who does not understand it.

21. Don’t point your finger at someone when speaking to them.

22. Don’t try to one-up someone when they explain a brave act of another.

24. Don’t promise to do something you can’t deliver.

25. Don’t monopolize a conversation or repeat your words.

26. Don’t spit, scratch, or blow your nose during a meal.

29. Don’t sit at the head of table unless asked to do so.

30. Listen to your conscience. 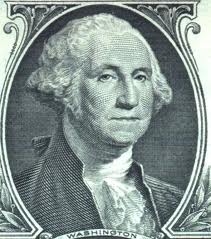 How many of Washington’s Laws of Decency did you break today?

Which rules do you really, really wish people would still follow?