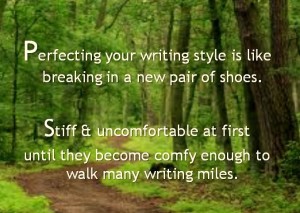 Ready to begin writing the first draft of your novel? Better put on your writing shoes for completing that 1st Draft Mile.

Writing a novel is like walking: Having a destination, avoiding obstacles, enjoying the scenery, and hitting your stride makes the journey more interesting. Now, which footwear will you wear?

flip flops: For the minimalist whose plots, sub plots, action, character development, & dialog are lean and mean. They add detail, mood, and style in subsequent drafts, unpacking a 55,000-word 1st draft into a 89,000-word  final.

high heels: Concerned with first draft appearances, these writers balance character development, sentence crafting, nuances, and careful plotting until satisfied–even if it’s a bit wobbly. They prefer the arched support of a developed novel. Fancy embellishments and subtractions are done after strutting their stuff.

loafer: Write a bit, complain a little, brew coffee, take a break, enjoy social media, write a bit more. Maybe skip to the end—yeah, the end, or the love scene—they really want to write that steamy love scene. These writers enjoy dawdling before writing a difficult scene. They don’t fret too much though because they are confident it will get done eventually.

lug-soled boots: This writer doesn’t wait for inspiration—they lasso it with their Rope of Determination ( like Wonder Woman’s Lasso of Truth but for writers ) and trudge through the first draft with unwavering determination. They don’t shy away from fording a quagmire of plot problems and character issues because their boots were made for walkin.’  (can you hear Nancy Sinatra singing, “These boots are made for walking, and that’s just what they’ll do?”)

running shoes:  Sprinting to the end—their fingers flying over the keyboard, these writers value the speed with which the words explode from their brain. The faster the better. Complete sentences? Mispelled words? Forget about ’em, this first-drafter runs past them—time for fixes later.

What pair of writing shoes do you put on?