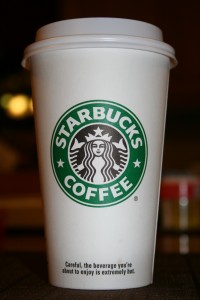 The other day while my daughters and I were shopping at the mall, we stopped for a Starbucks.

The line was maybe 20 people long. Wimpy Californians had stopped to warm their chilled bodies with mochas, lattes, and other caffeine confections. The fashion of the day: skinny jeans tucked into boots, sweaters, wool scarves, coats and ponchos. Yep! We were all bundled up. 50 degree weather is downright arctic in SoCal!

We placed our order:one tall skinny mocha, one mocha, one soy strawberries and cream, no whip, and one chocolate croissant.

The small store was jammed packed. At least fifteen people are waiting for their drinks. One minute passed. Two minutes passed. Three minutes passed. All three of us wait patiently for our order, knowing it would take longer than usual.  We passed the time deciding which store to hit next and listened to why my oldest daughter did not want to go to Anthropologie  ( “It makes me too sad to see all the things I can’t afford. Unless you’re buying, mom.”)

“Oh, I heard my order,” my youngest tossing back long blonde tresses, saunters to the pickup counter. She pardons and excuses her way through the thick crowd.

A moment later she is sipping on her drink, feeling special because she got her order so quickly. We chat some more.

“Oh-oh.” She says licking the whipped cream from the straw. “This isn’t mine.” She

looks at the writing on the side of the cup. Sally. “I stole someone’s drink. Now what do I do?”

Looking guilty, we immediately begin glancing around the store. Where is Sally? Does she know my daughter jacked her strawberries and cream?

“Who cares,” says my oldest daughter.”Drink it.”

“I can’t. This has milk in it, I’ll get sick if I drink it.” (Actually, her reply was disturbingly graphic.)

We burst out laughing! Not because we were unsympathetic about her lactose intolerance, we just realized that someone was still WAITING for their strawberries and cream.Waiting. And possibly watching…

Who knows what would happen if someone suspected you of over-priced beverage abduction! An altercation? Accusations? It looked like a pretty placid crowd—but you never know.

“Take it back,” oldest daughter says.

“No way. You have a choice, drink it and be sick tonight or take it back and look stupid.”

Another round of laughter. Who wants to look stupid?

In the end, my youngest did return the strawberries and cream ,and we eventually did get our drinks.

Have you ever accidentally or on purpose taken someone else’s drink order? Has anyone ever taken yours?  Did you confront them? Tell the barista?