As an author of urban fantasy and lover of all things mythological, I thought a bit of fiendishly sexy might be fun!

The following is a list of our most licentiousness sexual predators. And we must be intrigued by ’em or why would there be so many Vampire novels,  movies, and TV shows about them! Bring on the sexy demons!

Centaur: Half man, half stallion, these drinking, frolicking creatures like a good roll in the hay with willing lasses. They’ve even been known to kidnap a bride (and her attendants) on  her wedding day!

Encantato: Good-looking enchanters  or enchantresses who come from the  Amazon river’s depths to sing, dance, and make whoopee with the locals! Once enchanted, the Encantato takes their lover—or progeny—back to their magical water world. Evidently, the Encantato can live for many years posing as human. But don’t piss them off—they have the ability to make their enemies go crazy. 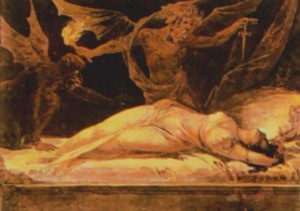 Succubus: Beautiful female demon who does the nasty with men in the dead of night. The wanton she-devil  might decide to have sex until the man died of exhaustion or turn him into a lustful predator.

Note: The Incubus & Succubus have been around a looooong time. Three thousand years ago, ancient Sumerians had the same problems with them.  Some things never change! 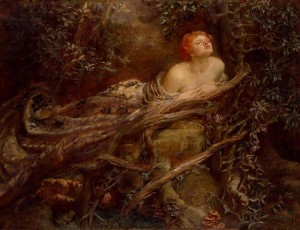 Lamia: A gorgeous woman on top and a rainbow-scaled snake below, the she-serpent seduces men and eats small children! Greek myths say Lamia fell victim to Queen Hera’s rage when she found the Libyan queen making sexy time with cheatin’ hubby Zeus. You know what they say about a woman scorned…”Hell hath no fury.”

Nephilim: Fallen angel dad, human mom, these giant men are known for their  VERY promiscuous behavior with the earthly ladies!

Popobawa: Roaming around Zanzibar, this smoke-smelling male demon rapes other males! The latest attacks were in 1995 and  all the victims reported the SAME sensation of suffocation and paralysis.

Vampires: Of course, no salacious demon list would be complete without mention of this iconic creature. Blood. Sex. You know the bit. The Merkabah Deception provides a few interesting facts about where, when, and how Vampires came to be a part of our history.