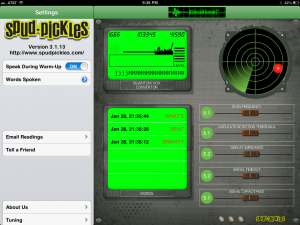 This past weekend, I turned some friends on to the iPhone Ghost app. For those of you who don’t know, it’s a free app that reads some kind of ghostly frequency. Red, blue, yellow,and green dots on a screen show if a spirit is present. If the ghost is communicating, words appear on the screen.

I TOLD my friends it was really spooky. I WARNED them! Well, the next day they were totally freaked about words that appeared on the screen and how those words directly related to her deceased mother.

But sometimes you don’t need a Ghost Radar to know there’s a spectral presence near by!  This was the case at my brother’s house. A new job in another state and a crappy economy, had my brother moving into a rental while he decided what to do with his house.

My brother is the macho type; he owns guns, two champion hunting dogs, and isn’t afraid of anything! (He once had to deal with a charging elk, but that’s another story).

So, he wasn’t surprised to learn that the former owner had been  violently murdered in her home. Newspaper articles confirmed what his coworkers told him when he shared the address of his new home.
A few months later, I came out to SLC for a visit.

“Hey sis, come check out my house. You get strange feelings all the time, tell me what you think.”

Enter Sis. The house was cold–and it was 90 degrees outside ( there’s no AC)

I walked through the living room-seemed OK–entered the dining room–nothing scary here–turned the corner and entered the 2nd bedroom–and BAM that’s when I felt it!

“Yep, she likes to hang out there. Turn on the ghost radar.” Brother points to my phone.

But I did anyway.

“How long does it take to work?” he asks, hovering over the phone.

The red dot appeared instantly and then–silly me–I began to talk to the spirit. No, I am NOT a medium.

I walked out of the cold spot and back into the dining room.

I glanced up at my brother whose mouth hung open in shock.

“What is it?” There didn’t seem to be any holes in the dining room.

“You’re standing directly over a large hole in the basement that used to be an old sewage drain.”

Finally, I told the spirit to “go to the light” (Stupid, I know, but what does one say to a ghost?) The spirit replied she was angry.

I turned that ghost app OFF and hightailed it out of the house.

Tomorrow’s blog…mom, brother, and sis attempt to get rid of the ghost.