Novel Wednesday: What do ghosts & dark matter have in common?

Got ghosts?  Do you believe in ghosts? Ever seen one? Ever feel the sudden chill—get the distinct impression some otherworldly entity is standing beside you? (no, not your teenager)

Admit it! Forces from the “other side” and the spirit realm intrigue and mystify! Why else would there be so many mediums (Ouija boards), novels, books ( hello, Sylvia Brown) TV shows, documentaries, and movies about spirits from the netherworld.

How does this connect to dark matter? Did you know that  84% of the matter in the world is comprised of dark matter! It’s a little-understood energy force that explains phenomena like migratory behavior in the animal kingdom, cosmic events (black holes), and unexplained anomalies in the world—perhaps, even ghosts and spirits.

I purchased the 99 cent Ghost Radar app for my phone. Talk about scary!  My kids won’t let me use it in the house anymore. They didn’t see the “fun” in this entertaining app.

On a recent trip to Hearst Castle, the ghost radar went crazy in the famous pool room. I never saw so many yellow, green, and red lights on the screen before. Say what you will—that ghost app was reading something!  But what?

Info about the Ghost Radar app claims it reads electromagnetic fields and various vibrations. Of course, that would require more sophisticated technological upgrades than possible in your lil’ ol’ phone. But if you read the testimonials—very freaky. 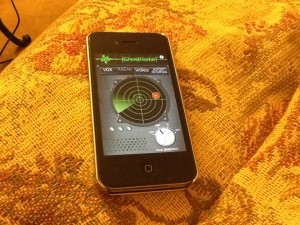 A red dot indicates a spirit was next to me–yesterday afternoon!

A word of caution: Don’t use your ghost app when you’re in an “official” haunted house.

Quick story: The first bona fide ghostly presence I really truly felt—frigid air, icy pins & needles—was at my brother’s home in Salt Lake City, Utah. Little did he know, he rented a house where an elderly woman was beaten, raped, and killed few years prior. Now, my bother’s a macho dude and not likely to believe in ghosts—but he swore he felt a presence not soon after moving in. His 2 large hunting dogs were spooked, too—and you know dogs just sense these things! ( dark matter, perhaps?)

My brother asked me to use the ghost app in his house. I’ll skip the creepy details ( save that story for another blog)—but let’s just say, I hightailed it on out of there as soon as possible. Even he was a bit shook up—in an alpha-male kinda way.

My husband swears there’s a ghost in our house. I agree; I think the phantom’s a relative of mine. The spirit taps him awake when he falls asleep on the couch and lets the dog out of her kennel (no way the little pooch can lift a latch).

What’s on your ghost radar? And what is the app really reading?

What’s the dark matter connection to my novel? The mysteries of dark matter are explored in The Merkabah Recruit, where myth, history, and science collide! 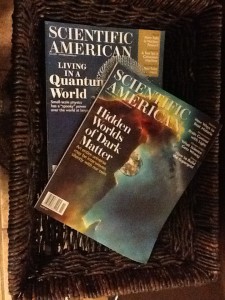