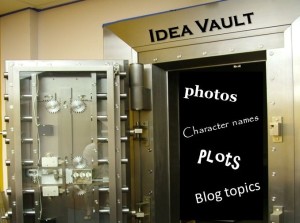 Writers have a plethora of ideas. Idea Bombs usually come at odd times–when driving, during a conversation, at work, or while drifting off to sleep.

It never fails, one minute you’re engrossed in some task, the next--kapow!— an explosion of ideas blows up your mind! I have some of the best ideas while cooking ( shhshsh….don’t tell the hubby).

The not-so-great thing about an Idea Bomb is they are quick to dissipate into the ether, often before one can do anything about them.

Here’s a few suggestions for storing those ideas before it’s too late. Use Idea Vaults. Warning: This is for the techno-proficient. Sorry Luddites, you’re just have to carry pen and paper wherever you go.

The downside of using technology?  Computers, phones, and iPad can be lost, stolen, or go under water. However, I’ve lost more scraps of paper with brilliant ideas ( cough cough) than I’ve lost with technology.

Do YOU use Idea Vaults?