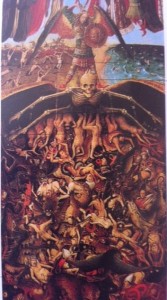 Yeah, yeah…you’re not going there...well…maybe some of you are!  As many of you know, I spend lots of time researching for my mystery/supernatural MERKABAH series. (The work-in-progress historical fiction also requires slavish research–but, hey, I’m a nerd)

And it’s summer in Southern California and hot as hell!

Here’s a snippet of the information I learned during one of my research days.

Aw Hell! Most religions have some version of Hell. Our “modern” Christian view is no less colorful than ancient Babylonian and Assyrian versions. Most of our knowledge of Hell comes from apocrypha–that is, sources of doubtful origins.

Hell is referenced in the Bible anywhere from 65 to 31 times depending on the translation. Why the discrepancy?  Hell has lots of synonyms–and they don’t all mean the exact same thing: Sheol (Hebrew), grave, pit, Hades, hellfire, Gehenna, tartaroos, Abyss—to name a few. (Your first marriage to that man doesn’t qualify)

Anyway, here’s a brief tour of Hell according to classic art, Dante, and other 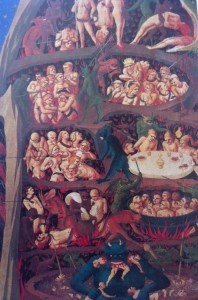 apocryphal texts. See ya on the other side!

Hell: Location: Bowels of the earth. Residence of Satan. A downward spiral with distinctive levels. Guarded by Satan’s gruesome minions.

Gates of the Netherworld: Art depicts the entrance as the mouth of a ferocious beast who devours folks’ souls  as they enter. Jesus even referenced the gates when he says to Peter,  “Upon this rock I will build my church, and the gates of the Netherworld shall not prevail against it.” Kind of like the roach motel-you can check in, but you can’t check out. Luckily, an angel holds the key that locks the gates.

The City of Dis: The city of the damned is fortified with iron walls that burn with fire, guarded by demons, and surrounded by the Stygian swamp. ( No, it wasn’t the last house your real estate agent showed you) The city also boasts several burning red towers. Once inside, you’ll find the usual suspects–heretics, swindlers, and sadists– being eternally tormented. 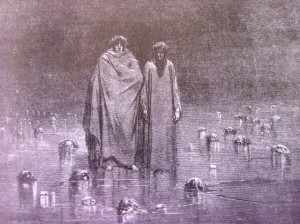 Acheron, Styx, Phlegethon, Cocytus Rivers: No jet-skiing in these infernal rivers! Charon’s boat ( a myth with Babylonian origins) ferries the damned across the Acheron river. Further downriver, it becomes the Styx ( named for an underworld deity) where it circles Hades 9 times. It becomes the fiery volcano-feeding Phlegethon, where those who kill their fathers are punished. The river then surges into the Cocytus, where the tears of the damned form an ice lake at Hell’s ground zero. Chained traitors writhe in the ice with only the tops of their heads breaking through the frozen surface. Whether a traitor’s head is down or up is determined by the type of betrayal. By the way, traitors were considered the worst sinner of all, thus their torments in the deepest depths of hell.

Whew, we made it out of Hell!