Learn about any creation myth and chances are you’ll find mention of super tall, robust, and muscular beings. Kinda makes you wonder doesn’t it? Why did giants first roam and rule the earth?

All these Gigantors have one thing in common: Divinely amazing strength.

In alphabetical order, here’s a list of a few of the world’s great giants: 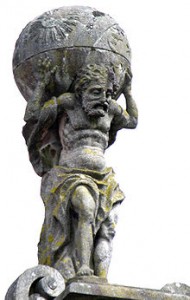 Atlas: Greek Titan: After Zeus beat him up, he condemned Atlas to bear the world on his shoulders for ever.

Balor of the Evil Eye: Celtic one-eyed king of the Fomorians who killed people with one baleful look.  He and his giant kind were the first inhabitants of Ireland.

Daityas: Evil Hindu spirits who made war against the gods in the Beginning. The Goddess Indra kicked their hateful butts and threw the nasty lot into the ocean

Gogmagog: Big Boss of giants who lived in ancient Britain.  Killed by a short Trojan warrior who tossed him off a cliff.

Jentilak: Hirsute dudes who lived in the Pyrenees and tossed rocks from one mountain to another.

Nephilim: Half fallen angel, half human; they are the warlike and lascivious giants mentioned in Genesis and few other ancient texts ( my 2nd novel, The Merkabah Deception goes into more detail). 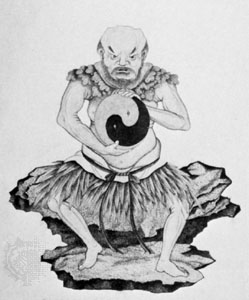 Purusha: Colossus with 1000 heads and 1000 feet. After he was dismembered, his body parts were put to good use. The moon is his mind: the sun, his eyes; the wind, his breath.

Ymir: Norse Founder of the Frost Giants. Later, his body created the earth.

Zipacna: Evil Mayan who claims he created the mountains.

Did you notice? These mythical giants are all men!

Other similarities:The big dudes are all conquered.