Married in her teens to a 40-something widower Roman commander named Septimus Severus—soon to become the first African Roman emperor—Julia & Septimus became a formidable “power couple.” Septimus knew Julia was the one for him when  an astrologer predicted the she would one day be queen.

All accounts say their marriage—despite the age differences–was happy and loving.

Julia, daughter of a high priest from Syria, was extremely intelligent, courageous and didn’t   take s*** from anyone. She quickly learned the art of politics, and was soon involved in all sorts of  intrigues, strategies, and political machinations. She was also an avid reader and loved to talk philosophy. 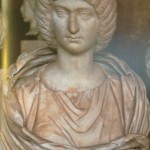 During those times, women were expected to stay home and wait for their emperor husbands while they fought wars for territorial domination–but not Julia! No way! She went with her hubby–his confidant and steadfast companion. Later on, when he did leave her  home on his campaigns,  he left Julia in charge, knowing she would manage and administer the wily affairs of state with all the smoothness of a  consummate politico.

She bore two sons—who didn’t much like each other, especially when it came time to decide who would take Dad’s place as Emperor of Rome.

In an attempt to reconcile her feuding adult sons, she begged for a meeting—minus their armed guards. The youngest son was murdered in her arms—almost certainly by hit men hired by the jealous older son.

Horrible, yes? Roman politics was ever so much nastier than politics today (well, on second thought…)Try as she might, this powerful mom could not persuade her eldest son to be a better Emperor (a petty, mean-tempered, wacko ruler), although she did her best to keep the Severo reign going.

When her Emperor son was murdered, the new Emperor exiled the still politically connected Julia. Did she go? Or no. The now frail and cancer-plagued Julia, stayed put in her home and starved herself to death. She was 47 years old.