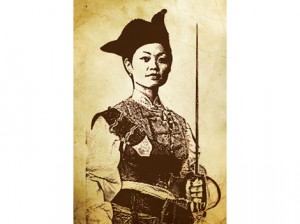 This fab female was famous for her booty.

Cheng I Sao, aka Zheng Yi Sao—which means Cheng’s wife—was more successful than any of the Beards—you know, Blackbeard or Blue Beard.

Her life was the stuff of romance novels! A prostitute in Canton, China, the missy caught the eye of a handsome Chinese pirate captain who decided she would be the perfect wife. Little did he know he had yoked himself to one enterprising hottie!

During the first six years of their wedded pirating bliss, she learned the piracy ropes as they looted the South China Seas together—so romantic.

Instead of shivering her timbers when her pirate captain went to Davy Jones’ locker—pirate talk for ‘he met his demise in the ocean’—she hooked up with hubby’s 2nd in command and promptly expanded the booty business.

Soon she had over 40,000 pirates working for her and commanded 400 hundred vessels! She ruled the seas!

In 1810, amnesty was offered to pirates and, being the savvy woman she was, Zheng Yi Sao decided enough was enough, quit the pirate business and opened a gambling establishment with the loot.

Zheng Yi Sao was one bodacious babe with a bounty of booty.

Writing a novel like this requires extensive research. I was lucky to get my hands on an out-of-print book by the foremost authority. If you have questions, I’ll do my best to answer them.

Zheng Yi Sao is the subject of my third historical fiction. If interested in receiving notification about the novel’s publication, leave a comment with name and email. Your email will not be shared and will remain private. You will receive no emails other than the novel’s release date.