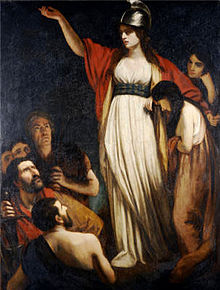 Bodacious Boudicca was the queen of the Icini tribe in Briton (the area is called Norfolk now) in AD 60.

After her husband, King Prasutagus died, Roman publicani (crooked tax collectors) and loan sharks infested the land demanding MONEY $$. No frail flower, Boudicca knew she was being played and manipulated by Roman thugs so she voiced her objections—loudly!

The Roman response? Boudicca was flogged (whipped)  and her daughters publicly raped and beaten.

Rightly incensed at this atrocity, the red-head Boudicci gathered her warlike people and led them in a revolt against the Romans where she devastated the 9th Roman legion. How did they do this? The stealthy Celts engaged in guerrilla style warfare, moving quickly through the dense forests and taking the slow-moving Romans by surprise.

Victorious— but still pissed off—she advanced on London, a hub for Roman trade.

The numbers are suspect but Boudicci’s army reportedly slew over 70,000 Roman citizens who were living in London.

The tide soon turned and the growing revolt against the Roman interlopers ended in tragedy when the over-confident, ill-armed Celts could not withstand the highly-trained, well-equipped Roman forces. The massacre was  vicious— men, woman, and children–no one escaped the carnage.

Reports differ over the death of this warrior woman. Some say  Boudicci committed royal suicide by poison ( the rage at the time). Others contend she became sick and died.

To learn more about this Fab Female check out the University of North Carolina’s website at http://www.unc.edu/celtic/catalogue/boudica/catalog.html