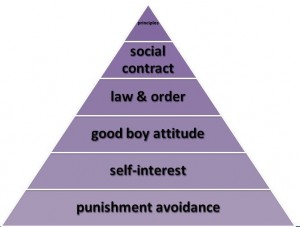 But did you stop to think about your characters’ morality, or more specifically, what level of morality they have achieved? Creating a character with moral issues, flaws, or strengths can add depth and understanding, often justifying and explaining why the character did what they did.

Stage 1: Obedience & Punishment Orientation:  Age: 9 & under. Standard of behavior is determined by adults and the physical consequences of following and breaking the rules. Child avoids punishment by good behavior. Child believes that if a person is punished they must have done something bad.

Stage 2. Individualism and Exchange. Child realizes authorities ( parent, teachers etc) may have more than just one right view and that different individuals will have different viewpoints.

Stage 3: Good Interpersonal Relationships. Age: Most adolescents & adults. Moral standards are internalized by those authority figures the individual deems right/moral. These authority figures are not questioned. Any and all reasoning conforms to the group’s perspective. The individual is good because they want others in the group to view them as good. They need the approval of their group.

Stage 4. Maintaining the Social Order. The rules of society are important to the individual. Rules are obeyed to maintain law/rules and to avoid guilt.

Individual judgment is based on self-chosen principles, and moral reasoning is based on individual rights and justice. This occurs in only 10–15% of adults and not before the mid-30s.

Stage 5. Social Contract and Individual Rights. ONLY 10-15% OF ADULTS REACH THIS STAGE and rarely before their mid-30s. The individual idealizes that while laws/rules serve the good of the majority, the laws/rules can also work against specialized groups/minorities. Thus, Right and Wrong are not clear cut.

Stage 6: Universal Principles: Individual understands that justice, equality, and human right issues are not law/rule governed. These individuals will break rules/laws to defend the greater moral principles even if if it means imprisonment or society’s disapproval. Very few reach this stage. 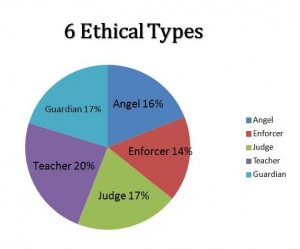 Now let’s look at 6 ethical types. This is courtesy of The UK Times.

Philosophers are good at solving tough ethical dilemmas. They will break the rule/laws if a higher principle is at stake.

Angels  believe being good to others is important. They give people the benefit of the doubt and give second chances rather than stand on principle.

Guardians believe in doing what they are told to do because it’s the best course of action for everyone. Greater moral ideals are rarely considered.

Does your story require delving deeper into your character’s morality?