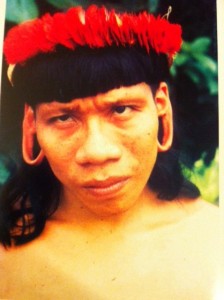 Otzi, a 5300 yr-old mummy found in the Alps, had 59 tattoos! And stretched earlobes!   And don’t forget those Easter Island Heads! They have stretched lobes too!

I wouldn’t be surprised if Eve had her belly button pierced–that is–if she had a navel.

Much of the significance and symbolism behind body art has been forgotten. Rites of passage, spiritual protection, clan identification, religious/social leadership status, and scare tactics were a few reasons  why the ancients indulged.

Eyeliner: The kohl used in ancient Egypt cut down the glare of the desert sun ( think football players). Egyptian women painted their upper lids with black, and lower lids with green malachite, which symbolized joy, youth, and rebirth.

Henna: The beautifully elaborate designs are applied for occasions like weddings and other important festivities. The stain comes from the Lawsonia inermis plant. 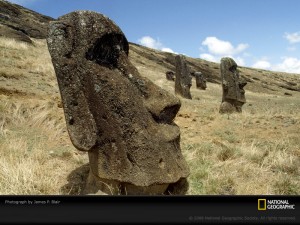 or spiritual authoriy. The Huaoranii, a remote tribe in Amazonian Ecuador, use balsa wood to stretch their lobes. Note: More detail about this tribe is found in The Merkabah Deception, when the heroine must brave the jungles of the rain forest to solve a paranormal crime.

Lip plugs: A beautification or indicator of status for a few Amazonian and African tribes.

Nose rings: Hindu brides in India perform puha–a ritual to bring health and prosperity to their husband. During the ritual, her nose is pierced, signifying her new married status.

Tattoos: Perhaps, the oldest form of body art. The earliest tattoos protected the wearer from evil–a sort of lifetime talisman. They also marked social status, tribal affiliation, rites of passage, and were considered sexy. Not much has changed.

Piercings: Ancients believed that evil spirits entered through a body’s orifices—the ear being a readily available entrance point. Ears were pierced with symbolic jewelry to ward off evil. Ancient slaves were often identified by their pierced ears. But kings and nobility had pierced ears as well. There’s probably several books on the history and significance of piercings.

So, next time you see an adult with lots of piercings and tattoos you can say, “That’s so 5300 years ago.”