The most frequent question I’m asked is “What’s a Merkabah?”

The short answer: The Merkabah is an ancient geometry and spiritual tool found in many religions.

Pronounce it as though each syllable was its own word:  Mer …..kah….bah.

The word comes from ancient Egyptian texts and each syllable has a specific meaning. 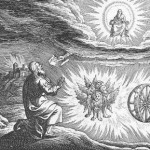 NOTE: This is not an uncommon concept. Most religions, even Christianity, recount stories of people physically manifesting in another place or time.

One thing is for certain. The Merkabah is steeped in mystery, its power and divinity lost in ancient texts and buried in the sands of time.