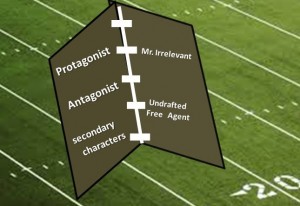 Do you choose characters like an NFL draft? Let’s break it down!

1st Round Draft Picks: These are the BIG stars. In the football world, they have talent and that ‘it’ factor to get the team to the promised land (Super Bowl). The 1st round picks in your novel are the protagonist and antagonist. You—as coach—must hone their natural talent and skill to get the most out of them—full character development  achieved through countless hours spent with dialog, action, and description. Readers expect great—or horrible—things from them! A 1st round draft pick who doesn’t deliver sends your team—your project—into the dumpster.

3rd-5th Round: These are supporting players building the team. They may not be the stars or 2nd picks but they are an integral part of making a team championship caliber. These characters can make or break your story by being ineffective, unbelievable, or cliche. A strong cast of characters—no matter how much ‘play’ time they get makes a stronger story.

6-7th Round: These players have potential and may even make the team but they are long shots. Sometimes these characters blossom while writing the story, even if it’s a bit part in your plot but chances are you didn’t even give them a name.

Mister Irrelevant: Celebrated one moment, gone the next! The last pick of the draft. These characters are expendable, a quick DELETE scene/paragraph and the writer forgets about them. They don’t usually make your story’s final cuts.

Undrafted Free Agents: These players need to try-out on a team, and although they rarely make the cut they may have latent talent. Likewise, these characters may be hidden gems or have potential for your next project. Don’t discount them.

Now that you’ve assembled your cast of excellent characters on Team Novel you’ve got a shot at the big time—finding an agent or scoring a publishing contract!!